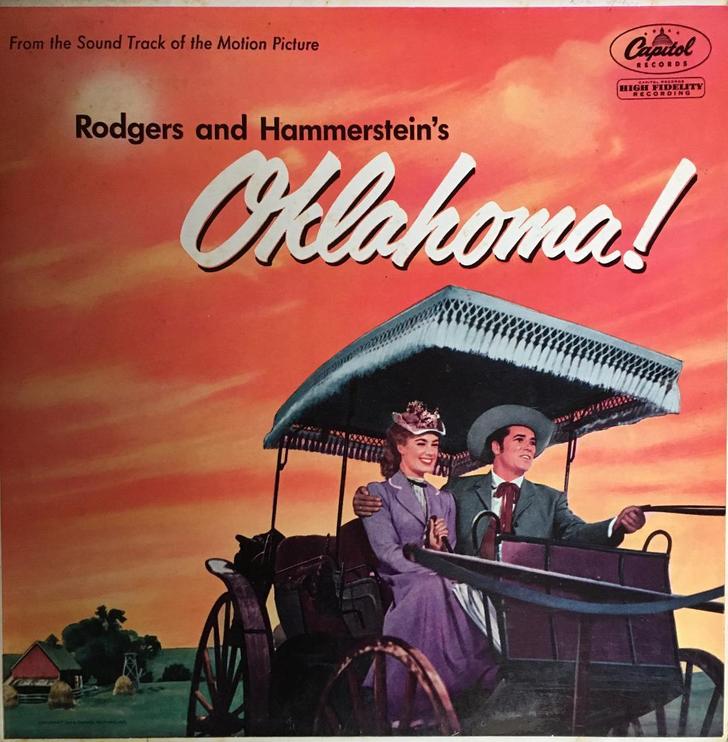 Musical Theatre, or ‘Music for Theatre’ is a diverse topic, and the variety and quality it offers ensures its place in the exam board syllabus. Both the AQA and Eduqas at A-Level curriculums give Musical Theatre equal weight to hefty genres like the western classical tradition and jazz.
One composer common to both syllabuses is Richard Rogers (June 28, 1902 – December 30, 1979). Rogers wrote 43 Broadway musicals and more than 900 songs, and is recognised as one of the most significant composers of 20th century American music. He is known in particular for his song-writing partnerships with the lyricists Lorenz Hart and Oscar Hammerstein II. His work has had a significant impact on musical theatre and popular music, and 2018 marks the 75thanniversary of the opening of his ground-breaking musical Oklahoma!
Rogers met Lorenz Hart, his first collaborator, at Columbia University, in 1919. Together they wrote 26 musicals, which were performed on Broadway, in London and recorded in Hollywood. Sadly the partnership ended in 1943 when Hart died. Their work together includes On Your Toes, Babes in Arms, The Boys from Syracuse (based on Shakespeare’s A Comedy of Errors) and Pal Joey.
In 1942 Rodgers began working with Oscar Hammerstein II who he had also met at Columbia University. Hammerstein had already made a name for himself working with Jerome Kern but the partnership of Rogers and Hammerstein took both to higher success. It could be argued that this musical partnership changed the American musical: Rodgers and Hammerstein musicals earned a total of 35 Tony Awards, 15 Academy Awards, two Pulitzer Prizes, two Grammy Awards, and two Emmy Awards.
Their first work was Oklahoma!. The musical was immediately popular and ran for an unprecedented 2,212 performances – 5 years and 9 months. This was a record that it held for 15 years, until My Fair Lady ran for 2,717 performances from March 1956.
The history of Oklahoma! provides its own interesting story. The musical is based on Lynn Riggs’s play of 1930, Green Grow the Lilacs the name of which is from an old American Civil War song. The play, set in ‘Indian territory’ in 1900, seven years before the State of Oklahoma was founded, was performed just 64 times on Broadway between January and March 1931. However, ten years later in 1941, Theresa Helburn, a producer at the Theatre Guild, saw a production of Green Grow the Lilacs which was supplemented with traditional folk songs and square dance. She saw that the play could be the basis of a musical good enough that it might revive the struggling Guild and approached Rogers and Hart about writing it. Rogers was interested in the project and bought the rights to the play.
Green Grow the Lilacs
Rogers had already started talking to Hammerstein about working together with Hart. Hammerstein had said he would be happy to work with Rogers if Hart were unable to work, and as Hart was struggling with alcoholism and finding it hard to write, it was suggested that Hammerstein would be an ideal new partner for Rogers.
Coincidentally, Hammerstein had already considered setting Green Grow the Lilacs to music, but his then collaborator, Kern was not interested, so when he heard that Rogers was looking for a partner to write the show, he jumped at the opportunity.
One of the reasons the Rogers and Hammerstein partnership worked so well was that the partnership allowed both collaborators to follow their preferred writing methods: Hammerstein preferred to write a complete lyrics before his libretto was set to music, and Rodgers preferred to set completed lyrics to music. It has been suggested that this permitted Hammerstein to build the lyrics into the story so that the songs could enhance the story instead of diverting it.
The work was originally called Away We Go! But following tryouts, it was re-named Oklahoma!for the Broadway run.
According to playwright and theatre writer Thomas Hischak,
"Not only is Oklahoma!the most important of the Rodgers and Hammerstein musicals, it is also the single most influential work in the American musical theatre. … It is the first fully integrated musical play and its blending of song, character, plot and even dance would serve as the model for Broadway shows for decades."
However, initially it was expected that the show would bomb. According to theatrehistory.com
"The saga of the trials and tribulations of Oklahoma! before it reached its premiere performance in New York to become one of the surpassing triumphs of the American theatre is now a twice-told tale. Virtually everybody connected with the production was convinced he was involved with a box-office disaster. Here was a musical without stars; without “gags” and humour; without the sex appeal of chorus girls in flimsy attire. Here was a musical that strayed into realism and grim tragedy, with Jud as one of the main characters, and his death as a climax of the story. Here, finally, was a musical which for the first time in Broadway history leaned heavily upon American folk-ballet–the choreography by Agnes De Mille, one of America’s foremost choreographers and ballet dancers. Oklahoma!might be fine art, was the general consensus of opinion before premiere time, but it was poison at the box-office. The effort to get the necessary financial backing proved to be a back-breaking operation, successfully consummated only because the Theatre Guild, which had undertaken the production, had many friends and allies. But there was hardly an investor anywhere who did not think he was throwing his money down a sewer.”
In 1955 the show was made into a feature film, in fact, the first feature film shot in 70mm widescreen. It was also unique in that Rodgers and Hammerstein, having held onto the rights until the stage run had finished, personally oversaw the making of the film to ensure that no changes were made. As a result, the film follows the stage version much more closely than any other Rodgers and Hammerstein. The film won Academy Awards for Best Music, Scoring of a Musical Picture and Best Sound, Recording. 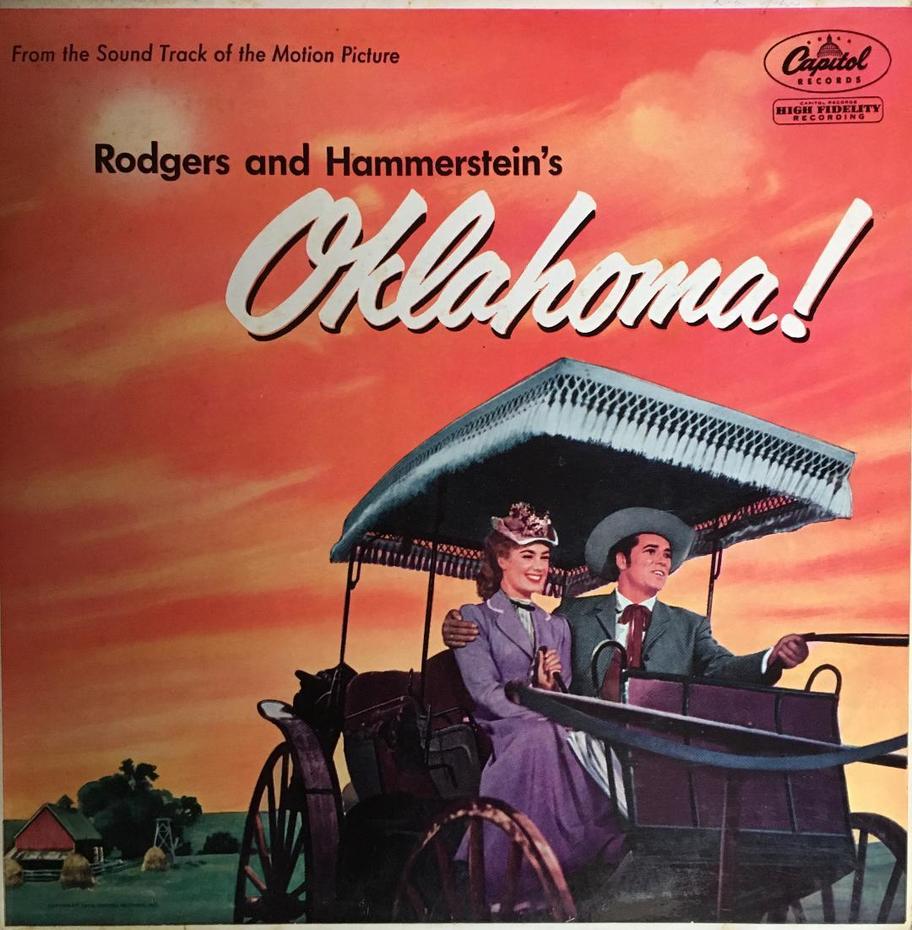 Fact file:
One innovative feature of Oklahoma! is the dream ballet sequence which reveals the hidden fears and desires of the main characters: A device that was later used in many musicals including, famously An American in Paris:
A key element of the story, following in the footsteps of Show Boat (also by Hammerstein) and Gershwin’s Porgy and Bess, is the showcasing on Broadway of the pioneering men and women who had worked the land of the American Southwest. It has been suggested that harking back to the ‘good old days’ was timely as Americans fought in the Second World War. Roger and Hammerstein’s Carousel in 1945 also built on this theme.
Oklahoma!It opened at the Theatre Royal, Drury Lane on April 30, 1947 to rave press reviews and sell-out houses, running for 1,543 performances. Its pre-London run opened a day late at the Manchester Opera House on April 18, 1947, because the ship carrying the cast, scenery, and costumes ran aground on a sandbank off Southampton.
The exclamation mark in the show’s title was in common use in musical titles in the 1930s and 1940s. As George Jean Nathan, an American drama critic and magazine editor stated “It seems that the moment anyone gets hold of an exclamation mark these days, he promptly writes a musical show around it”.
As the end of the musical celebrates the formation of the state of Oklahoma, the title song became the official state song of Oklahoma in 1953 and is the only state song from a Broadway musical.
Richard Rodgers was the first person to win all four top show business awards. He was awarded an Emmy, a Grammy, an Oscar and a Tony, and also won a Pulitzer Prize. 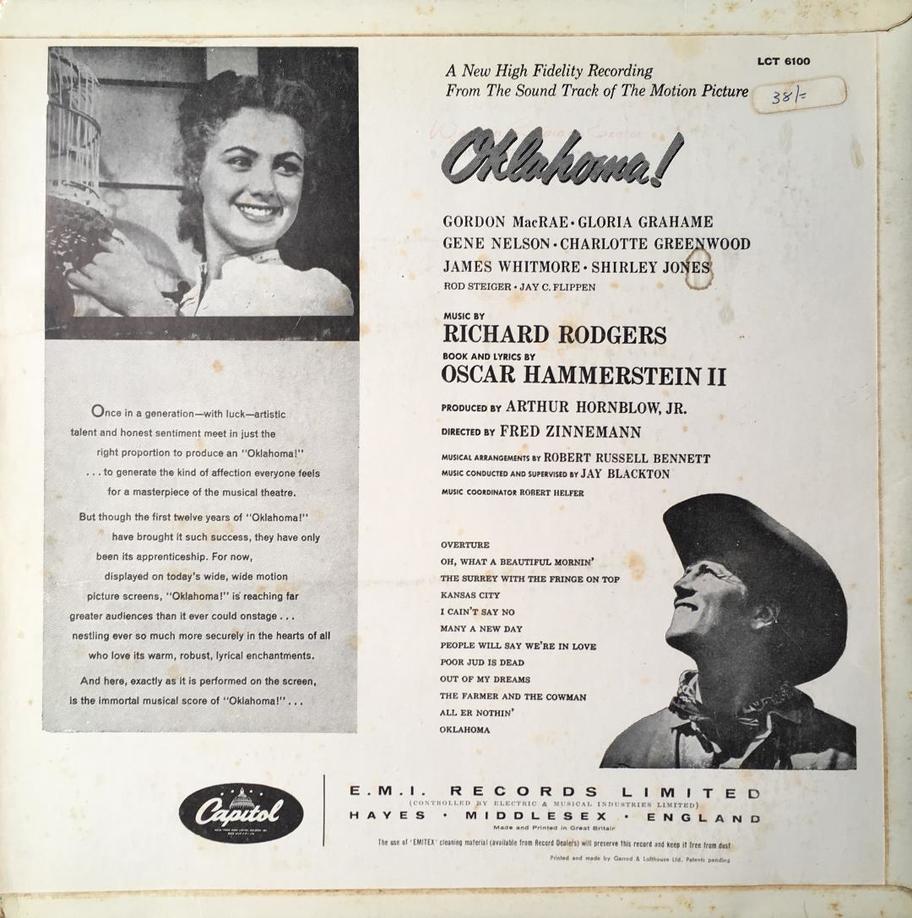 Songs from the musical:
Oh, What a Beautiful Mornin’
The Surrey with the Fringe on Top
Kansas City
I Cain’t Say No
Many a New Day
People Will Say We’re in Love
Pore Jud Is Daid
Out of My Dreams
The Farmer and the Cowman Annie, Laurey, Ike Skidmore, Cord Elam & Ensemble
All Er Nuthin’
Oklahoma!
BBC Proms performances with the John Wilson Orchestra.
BBC Proms performances with the John Wilson Orchestra
Tagged as: COMPOSER, MUSICAL, MUSICAL THEATRE, OKLAHOMA!, RICHARD ROGERS
Share this post: