The Extraordinary Life of Adolph Sax, Inventor of the Saxophone 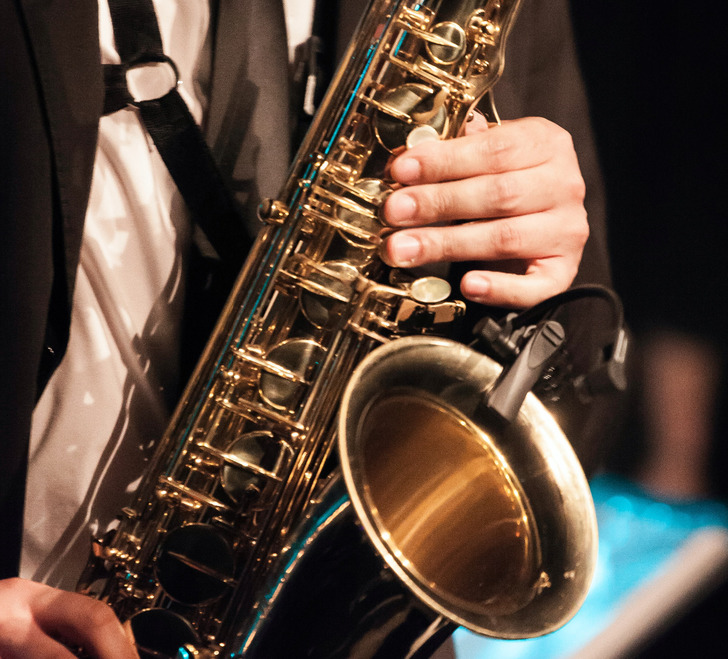 November 6th marks the birthdate of the inventor Adolphe Sax. Famous for the Saxophone, Sax conceived and patented quite a number of new instruments. His life was difficult and unusual, but his influence, and the thick, singing tones of his instruments or those they inspired, are still heard daily across music genres from pop to jazz and orchestras to regimental brass bands.
Image: Reno Laithienne. Unsplash
A family of inventors and an eventful childhood
Antoine-Joseph Sax, or Adolph as he was known from a young age, was born in 1814 in Dinant, which is now in Belgium. His father, Charles-Joseph, was a joiner and cabinetmaker who had moved into musical instrument production. His workshop was so successful that he was able to set up a factory in Brussels, where he was appointed to the court of William I of Orange as an instrument maker, supplying instruments to the Belgium regimental music corps. Charles-Joseph was self-taught, and he made woodwind and brass instruments and even some violins and pianos. He was also an inventor, registering a dozen patents and showcasing his work at various exhibitions. 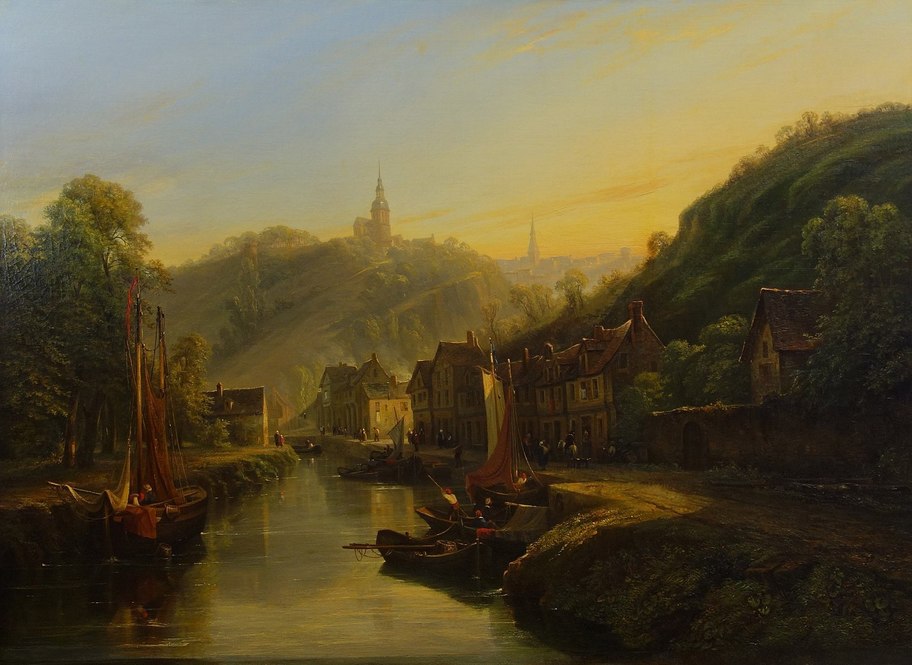 Image: Le port de Dinan par Isidore Dagnan (vers 1835), coll. Ville de Dinan - Musée de Dinan
Adolphe was influenced by this musical and inventive childhood. The boy learnt singing, flute and clarinet before becoming an apprentice to his father. However, his personal fortune was not straightforward. Colourful stories about his upbringing suggest that there were times when Adolphe’s parents thought he may not live long. A catalogue of misfortune befell the child. He swallowed acidic water when he was just 3 years old, tumbled from a third-floor window, was burned in a gunpowder explosion, fell onto a frying pan (burning his side) and escaped poisoning and asphyxiation when varnished items were left in his bedroom overnight.
His mother is quoted as saying: "He's a child condemned to misfortune; he won't live,". In the family’s local district, he was referred to as "little Sax, the ghost".
First inventions and a struggle for recognition
Adolphe’s first invention was a new 24-valve system clarinet, which he developed when he was 20 years old. He demonstrated this system, which he later patented, at the 1835 Industrial Exposition in Brussels. He also worked on a clarinette-bourdon, a contra-bass clarinet, a sound reflector, a piano-tuning process that remained the inventor's secret, and a steam organ "capable of being heard throughout the province".
At the Belgian Exhibition of 1940, Adolphe presented nine inventions. But he was refused the Gold Medal due to his young age. The organisers said that if he were to win the Gold Medal so early, there would be nothing to offer him the following year. He rejected the medal he was offered. If the panel thought him too young for the accolade he deserved, he felt he was too old for any ‘consolation’ prize. At the following year’s International Exposition in Brussels, he demonstrated his latest instrument; the saxophone.
In 1842, Adolphe moved to Paris.
Life in Paris and the production of new instruments
It was during his time in Paris that Adolph invented the Saxhorn. This instrument was a development of the valved bugle, and it came in seven sizes. The instruments were adopted by the British Brass Band movement. This family of instruments paved the way for the flugelhorn and the modern euphonium.
The saxophone was patented on 28th June 1846. Again, this was a family of seven instruments, designed for use in orchestras and military bands. Jo Santy of the Museum of Musical Instruments in Brussels explains:
“The first patent shows the mouthpiece of the clarinet, a detailed drawing of an ophicleide, and then the detailed drawing of the baritone saxophone, with next to it, rough sketches of the smaller versions up until the soprano. In rough sketch, the whole family is there,” 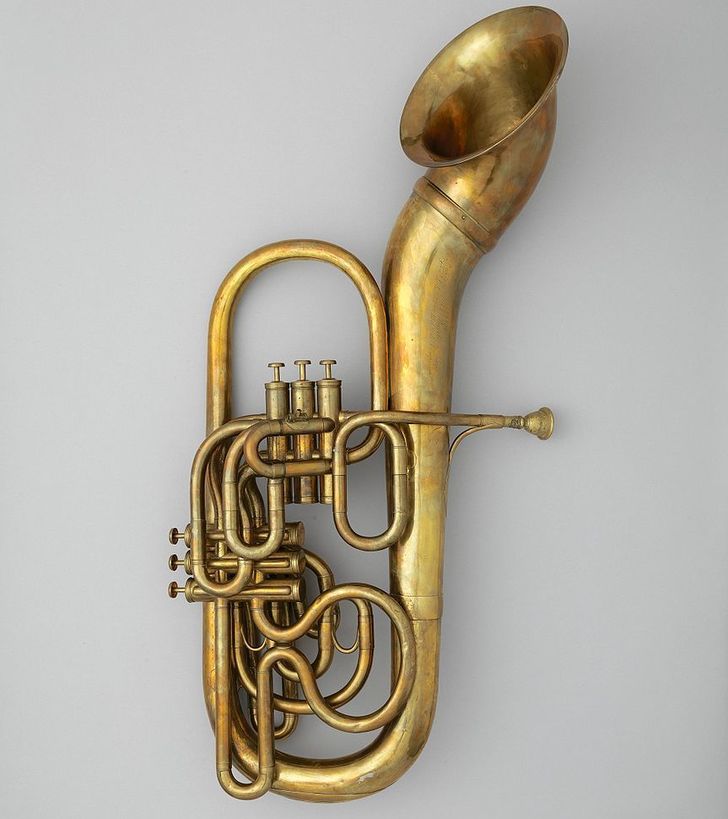 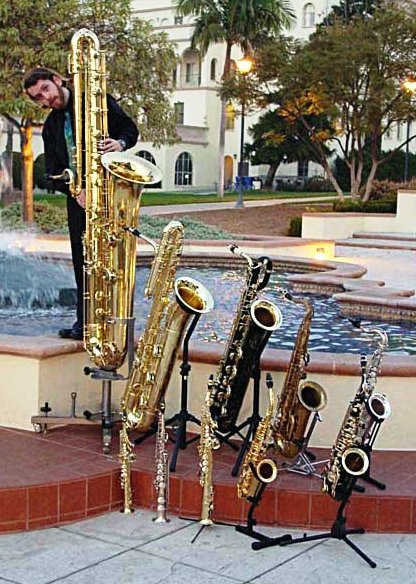 In Paris, Adolphe Sax was introduced to the composer Hector Berlioz. Berlioz was a big fan of Adolphe’s work, using saxhorns in a piece from 1844 and saying of the saxophone:
“Its principal merit in my view is the varied beauty of its accent, sometimes serious, sometimes calm, sometimes impassioned, dreamy or melancholic, or vague, like the weakened echo of an echo, like the indistinct plaintiff moans of the breeze in the woods and, even better, like the mysterious vibrations of a bell, long after it has been struck; there does not exist another musical instrument that I know of that possesses this strange resonance, which is situated at the edge of silence."
Another famous composer, Rossini, also liked the saxophone, calling it “the most beautiful amalgam of sounds that I know of."
In 1849, Adolphe won the cherished Gold Medal at the Paris Industrial Exposition. Between 1843 and 1860, his shop sold approximately 20,000 instruments. This huge quantity of saxophones was made by just 100 workers.
However, Adolphe’s life was beset by challenges, perhaps foretold in his childhood misfortune. Competitors tried to copy the saxophone, despite its patent. Adolphe took these imitators to court, but the court cases ruined him financially. He was declared bankrupt three times; in 1852, 1873 and 1877; only escaping a fourth bankruptcy due to the support of Emperor Napoleon III.
These misfortunes affected Adolphe’s health. Berlioz wrote: "Again and again, Sax is the victim of persecutions worthy of the Middle Ages and that recall precisely the acts and deeds of Benvenuto Cellini, the Florentine engraver. They took away his workmen, stole his plans, accused him of madness and took him to court. With a little more audacity, they would have murdered him. Such is the hatred that inventors always waken amongst those of their rivals that do not invent anything."
The Saxophone legacy
Adolphe Sax died in poverty in 1894. He will be forever remembered for his saxophone. The versatility of the instrument is such that it is used in military and wind bands, orchestras and jazz ensembles, particularly big bands.
Works written for the saxophone range from chamber music for saxophone quartet to saxophone choir pieces, classical concertos and jazz standards, and its popularity just keeps growing. In 2016, Jess Gillam made history as the first ever saxophonist to reach the final of the BBC Young Musician of the Year.
Further reading:
https://www.adolphesax.be/en/adolphe-sax/
http://www.dinant.be/en/inheritance/adolphe-sax
https://www.pri.org/stories/2013-12-03/meet-dangerous-belgian-who-invented-sax
Images courtesy of: Fred56530, César Guadarrama Cantú
Tagged as: ADOLPHE SAX, MUSICAL INSTRUMENTS, SAXHORN, SAXOPHONE
Share this post: