The Chineke! Foundation was established in 2015: it’s mission, to provide career opportunities to young Black and Minority Ethnic (BME) classical musicians in the UK and Europe. At a time when much of the news around classical music focused on laurel ts, elitism and the problems of engaging young people in a ‘difficult genre’, the organisation has stepped forward with inspiring energy.
Chineke!’s message is of real importance to young BME musicians. For these students, the orchestra offers more than the traditional outreach: It offers role models.
Learning and Participation Manager, Ishani O’Connor, has been in her role since June 2017, and has already found herself ‘very busy!’ The Music Workshop Company catches up with Ishani to hear more about Chineke! and its work both in the community and within its groundbreaking Junior Orchestra.
“The Chineke! Foundation and its Professional and Junior orchestras were founded by Chi-chi Nwanoku OBE 2 years ago, specifically to promote ethnic diversity in classical music. Chineke! has had a stratospheric ascent, recently culminating in the Chineke! BBC Prom at the Royal Albert Hall, an event with a huge audience reach and the youngest orchestra in its history to be offered a Prom, becoming the BBC’s second most memorable Prom online, with over 10 million views.
This is a massive achievement by a dedicated orchestra management team but fundamental to the success of the Chineke! Orchestra has been the firm belief that mentorship and learning are key to th e development of Chineke! as a cultural organisation. In this way, the Chineke! Orchestra provides the much needed role models for the Chineke! Juniors .
Chineke! Learning and Participation currently has a two-pronged approach to supporting the next generation; through the work with the Chineke! Juniors, encouraging young and gifted BME Classical music students by giving them opportunities to perform in the orchestra, and secondly by taking adult members of the Chineke! Orchestra into schools across the UK, to cities where the orchestra is touring, particularly in areas where there are higher statistical rates of BME communities. 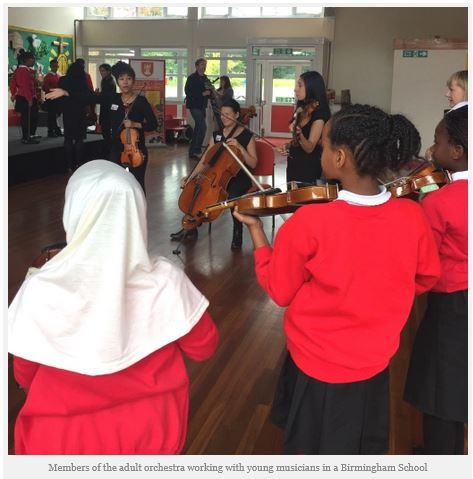 The Chineke! Juniors have the opportunity to perform in venues such as the Southbank Centre; in the Clore Ballroom and on stage at the Royal Festival Hall, but also in smaller venues such as at Hatfield House for the Hatfield House Chamber Music Festival – a sold out concert coming up in October 2017.
The Chineke! Juniors’ ages range from 11 to 18, and many are on a pathway to a Classical music career. The standard is from grades 6-8 and beyond. A professional orchestra starting its journey with an associate junior orchestra is unique in the UK and demonstrates a commitment to nurturing talent which is essential, if the Chineke! ‘effect’ is to perpetuate far into the future. The Chineke! Juniors act as a bridge between current youth music schemes and higher education, giving its players experience, encouragement and confidence during their formative years, whilst increasing the numbers of BME students currently studying music at third level.
A new star has shone this year, a member of the Chineke! Juniors who played in the orchestra’s first cohort in 2015. Sheku Kanneh-Mason; a dynamic and gifted cellist was winner of BBC Young Musician 2016 and has launched his solo career even before commencing his music degree. Although Sheku’s recent notoriety is all to do with his unmistakable talent, hard work and support from family and teachers, he is a brilliant role model to many of the young, BME musicians in the Chineke! Juniors but also throughout the world of music. Sheku’s association with Chineke! is evidence of a positive start to a great career and demonstrates the confidence-boost that playing with a group of BME musicians can give. The televised broadcast of Chineke!’s BBC Proms augmented Chineke!’s reach and I dearly hope that there will be BME students of classical music in the UK and across the world who watched this stunning concert who will be inspired by Sheku and the brilliance of the Chineke! Orchestra’s performance.
The young Sri Lankan born conductor, Manoj K amps guided these gifted young people whose confidence blossomed under his leadership . The Chineke! Juniors, many of whom were coming together for the first time, performed brilliantly both technically and musically . At the event, they also led a ‘Passenger Seats’ session on the Clore Ballroom where audience members of all ages sat next to and in between them listening. They also offered a ‘Have a Go!’ session where players from the Chineke! Juniors worked peer-to-peer, very successfully, with children of their ages who wanted to try their hand at an instrument.
In a parallel exchange of skills, the adult musicians from the Chineke! Orchestra over the same weekend mentored and supported the Chineke! Juniors during rehearsals, developing their performance techniques and encouraging them to lead the sections of the orchestra, to listen and make eye contact with each other and play-out with more confidence. I watched as the young people’s backs straightened during every rehearsal session and their concentration and involvement became more intense and focused. It was a very quick progression; the talent and skills were already there, they just needed the support and platform to shine.

In our work with schools across the UK, Chineke! L&P aims to reach as many young people as we can in regions that do not normally have the benefits of London’s large arts ecology. We work closely with venues where the Chineke! Orchestra is performing, who often have their own education programmes and music hubs or other charities who are well-connected to schools. These workshops also promote the huge benefits that learning music has to the students at a time when music education and the arts in general are being de-funded in favour of the EBacc subjects.
Recently, we took a string quartet of Chineke! Orchestra musicians into the assemblies of three primary schools in inner city Birmingham in conjunction with the Chineke! Birmingham Symphony Hall concert. The quartet played a special transcription of three of Elgar’s Enigma Variations (we commissioned from a composer), including Nimrod, deliberately relating the repertoire to the Chineke! Orchestra concert. ‘The Enigma’ also helped us to create an interesting narrative for the children as each of the variations are named after someone Elgar knew, number XI, entitled GRS, about his favourite dog falling down a river bank. 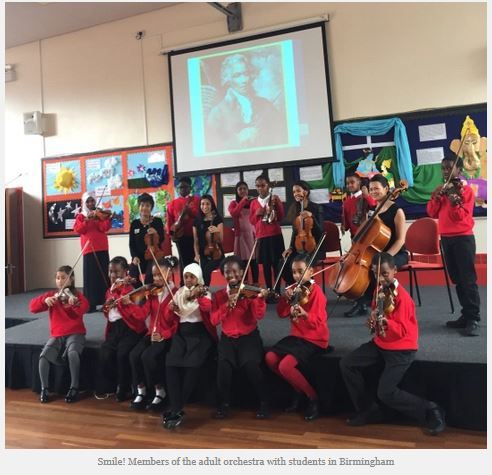 We also introduced the young audience to the work of a very interesting 18th century black composer, Joseph Boulogne (aka Le Chevalier de Saint-Georges) by playing one of his string quartets and with a presentation on his life. Born of a French plantation owner and an African slave, Saint-Georges was a multi-talented fencer, athlete, military commander and politician but also a violin virtuoso, orchestral conductor and composer who pioneered the string quartet as a musical form. The Chineke! Foundation also aims to educate the audience by celebrating the work of often forgotten or neglected, brilliant black composers. Other composers which the Chineke! Orchestra has played and continues to champion include, Samuel Coleridge-Taylor, Florence B. Price, George Walker and contemporary composers Errollyn Wallen and Hannah Kendall.
Chineke!, works through positive action, to enact change and increase the diversity of professional musicians in Classical music. The long-term goal is to see this change across manifold orchestras in the UK and in Europe. But music critics and regular concert-goers are already observing Chineke!’s effect on audiences, who are the most diverse I have ever seen at classical music concerts. Chineke! follows a very powerful, positive and effective journey of mentorship, which can be observed in the transformation of musicians who play in the Chineke! Orchestra and the unique privilege I have, of watching the Chineke! Juniors blossom during rehearsals and when they play on the UK’s most prestigious stages.
The Chineke! Foundation models how the combination of many different levels of mentorship can progress the development of individuals but also the whole organisation. Mentorship is demonstrated through peer-to-peer learning, professional to junior musician mentoring, the conductor’s leadership of the orchestra and it is transmitted from the expert performers on stage to curious audiences. This also encourages mentorship and support from venues and funders who see the great potential in an organisation that can lead the way in addressing the issue of the lack of diversity in the cultural and creative industries, through brilliant creativity and positive action. The most striking element of mentorship, however, is the unwavering leadership of Chineke! founder, Chi-chi Nwanoku OBE and her tireless effort to get the message out there; to encourage and recruit both young and established BME musicians and to change the face of the Classical music world, through direct action.”