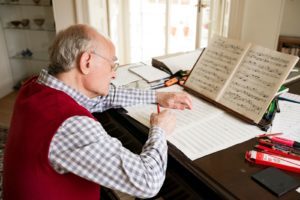 September 2020 marks the 75th birthday of composer John Rutter, CBE. Famous for his choral music, Rutter was described by one interviewer in Country Life magazine as
“probably the most oft-performed living composer,”
and by the New York Times as
“The Composer Who Owns Christmas.”
His extensive output includes Christmas carols, anthems and extended works such as the Gloria, the Requiem and the Magnificat.
Rutter grew up in London where he attended Highgate School, an institution with a strong choral tradition. His Shepherd’s Pipe Carol was written while he was 18 and still at the school.
Before Rutter had finished his studies at Cambridge University, his carol had already been published and recorded by EMI; one of the ‘big four’ record companies of the time.
Speaking to the New York Times in 2017, he said:
“By the standards of Mendelssohn, I was hardly a prodigy, but I’d made the transition from aspiring composer to functioning one.”
The famous choral composer Sir John Tavener, who died in 2013, was at Highgate School at the same time as Rutter. Although the two composers shared an education and both wrote in the choral tradition, their styles are very different. Tavener’s work is strongly influenced by his conversion to the Russian Orthodox Church.
John Rutter’s work resonates firmly with the Church of England choral tradition. Despite this, in a 2003 interview for the US television show 60 Minutes, he explained that he is not a particularly religious man. He identifies as deeply spiritual and is influenced by the spirituality of prayers and sacred verses. As with Tavener, his compositions echo personal beliefs, events and feelings. His work Mass of the Children was written after the sudden death of his son Christopher, who died after being struck by a car while a student at Clare College Cambridge, Rutter’s alma mater.
Rutter is a vocal advocate for music education in the State sector, rather than as a preserve of those able to pay. In his blog, Music, Nature needs Nurture, he says:
“Music is a gift of nature, but it may well remain locked in a box until someone gives you the key to release it. Once it is released and you discover your gift, someone has to encourage you, train you, and watch over you until you have been given the time to develop it fully.”
In another post, he calls on those in power to return music to the centre of the curriculum where it provides value in many areas of learning and personal wellbeing.
His expansive choral style is incredibly popular across English-speaking countries. But Rutter is not without critics. On a 2016 episode of the live music show, ‘In Tune,’ the BBC Radio 3 presenter Sean Rafferty described Rutter as "a creator of not just carols, but wonderfully great things for the human voice." However, in an article titled New Composers of Tonal Classical Music: Part II, British composer, David Arditti commented that Rutter is "hard to take seriously, because of the way in which his sheer technical facility or versatility leads to a superficial, unstable crossover style which is neither quite classical nor pop, and which tends towards mawkish sentimentality in his sugarily-harmonised and orchestrated melodies.”
Speaking to the NYT, Rutter seems to gently refute this comment, saying:
“When you write for choirs, you’re writing, generally, for amateurs, so a certain simplicity is needed, and I embrace that gladly. Especially in the Christmas music, which is for an inclusive festival where you leave your fancy good taste at the door if you want to get anything out of it.”
His work has sometimes been called derivative, drawing from Britten, Fauré, Walton, Ravel and even Broadway musicals. Rutter explains that composers fall into two groups, “explorers or magpies,” and that he is a magpie. He never set out to break new ground, instead saying:
“My gift, if I have one, is to take what’s in the air and use it.”
Whether his music is universally admired, it is certainly popular and performed around the world. His compositions have featured at the two most recent British royal weddings and he is active in choral music editing the Oxford Choral Classics series. He co-edited four volumes of Carols for Choirs with Sir David Willcocks and formed his own choir the Cambridge Singers. He has made numerous recordings with his choir and makes regular appearances as guest conductor and choral ambassador.
In an interview for CuedIn, Rutter is sanguine about his legacy and the conflict between ‘high art’ and pop music. He explains that he tries to bridge this gap by using tools from his classical music training along with pop and musical theatre influences: “We live in an era of the instant mix tape. It’s like cookery – putting in unexpected ingredients together just gives you something that you wouldn’t have had if you’d stuck with the tried and tested.”
One thing that cannot be argued is that through choral music, Rutter offers people the power to connect.
“One person saying I want the world to all be one – that’s fine. But I think if one hundred people sing it all at once, then it really does hit home.”
Tagged as: CHORAL MUSIC, JOHN RUTTER, MUSIC EDUCATION
Share this post: