Melody Amongst the Cacophony 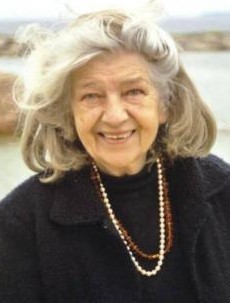 June 11 2019 marks the 100th anniversary of the birth of composer Helen Tobias-Duesberg.
Tobias-Duesberg produced a large and varied body of work. She was respected by her contemporaries and her work was regularly performed, yet few recordings exist and her name is not familiar.
It would be easy to draw the obvious conclusion that this is because of her gender. The contribution of so many talented and successful women in the Arts has been marginalised. However the promotion of female composers ‘for the sake of it’ seems unhelpful in redressing the balance. It could also be argued that her origins in the former Soviet Union might play a part, though she spent most of her working life in the US. With those considerations in mind, the reason for this blog is that June 2019 marks the centenary of the birth of an interesting composer.
Born in Suure-Jaani, Estonia, then part of the Soviet Union, Helen Tobias was the youngest daughter of the composer Rudolf Tobias. She never knew her father, except through his music, as he had died from pneumonia in October 1918.
Whilst his may not be a familiar name outside of Estonia, Rudolf Tobias was noted as the first Estonian professional composer. After his death his achievements were celebrated by the erection of monuments in Haapsalu and Kullamaa, the renaming of a street in Tallinn, and his name was given to the Children’s Music School in Kärdla. In 1973, the centenary of his birth, a museum was opened in Selja, Käina Parish in the house where he was born.
Helen Tobias studied music composition at the Tallinn Conservatoire (now known as the Estonian Academy of Music and Theatre). Her teachers were Artur Kapp and Heino Eller. She graduated in 1943 as an organist, and went on to further study at the Berlin University of Music.
During World War II she met Wilhelm Duesberg, a journalist who was to become her husband. He was imprisoned on numerous occasions for writing stories critical of Adolf Hitler, and died of a heart attack shortly after the war. At the time of his death he was in a Stuttgart courtroom preparing to testify against several Nazi war criminals.
In 1951, Tobias-Duesberg moved to the United States. Sources describe that it was then that she began composing music, although her training had been as a composer as well as an organist. The music she wrote was a far cry from much of the contemporary work at the time. In fact, in a swipe at the direction of classical music in the 1960’s and 70’s, Leonard Bernstein described her as a female composer who,
"…dares to be original and musical at the same time, while all the men run around writing intellectual cacophony.”
He had a point. Her Requiem is described by allmusic.com thus:
"A hybrid of the neo-Baroque and neo-Classical styles she absorbed in the middle decades of the twentieth century, though some aspects of Romanticism are evident in her instrumentation and presentation. Bach’s cantatas are the most pronounced influences, though Duesberg’s forays into fugue seem at times closer to Beethoven’s forceful counterpoint in his Missa Solemnis. But because this Requiem seems designed for practical use — specifically for the Estonian Bethany Church of New York — Duesberg’s use of traditional techniques is perhaps intended more for the congregation’s spiritual comfort than as a clever pastiche."
The writer also describes her shorter chamber works as “intellectually stimulating,” mentioning the “darkly chromatic Sonata No. 1 for violin and piano and the comical Suite for woodwind quintet, both of which reveal more of Duesberg’s character, since imitation of past models is replaced by her own ingenuity and craft.”
“Blessings” from Requiem:
Little is recorded about her personal life or feelings about political issues, other than the connection with her husband, but notably, during the Civil Rights Movement, she played the organ at Friendship Baptist Church in Harlem, the church where the Reverend Martin Luther King Jr. served as a guest preacher.
The full list of her works is extensive, and the comment from Bernstein indicates a relatively high profile, yet as previously mentioned few recordings exist. Although her work has been performed on major concert stages in the United States, Canada, and Europe as well as the Aspen, Ravinia and Spoleto festivals, her online discography reveals only two CDs; Through the Seasons, made a year after her death, and the album containing Requiem,Sonata No. 1 for Violin and Piano, and Suite for Woodwind Quintet, recorded in 2005. Compositions include violin and cello sonatas, string quartets, song cycles, concertos, and a wide range of choral works. She also reworked and edited some of her father’s work.
Helen Tobias-Duesberg died on February 4th in the US. She was laid to rest alongside her father and grandfather in her native Estonia.
Tagged as: COMPOSERS, FEMALE COMPOSERS, Helen Tobias-Duesberg
Share this post: