Music for my Mind

Music for my Mind is a new charity which seeks to provide evidence that personalised music enhances the lives of people living with dementia. The Music Workshop Company speaks to Project Assistant, Dimana Georgieva, to find out about the study, its potential impact and how it’s being funded.
For many years, it has been known that familiar music has a powerful effect on people. It can make us join in by singing along, tapping our feet or moving our hands, smiling or even dancing. Music allows us to go back in time and remember treasured memories from years ago. Using technology to select and monitor favourite music is new and a clinical trial will provide the evidence needed to make this treatment standard of care in care homes throughout the UK and internationally.
This is what Music for my Mind is all about. We are a new charity seeking to provide evidence that personalised music enhances quality of life and well-being of people living with dementia; it also helps them reconnect with their loved ones. We are working towards clinical trials that show the efficacy and cost-effectiveness of this approach. 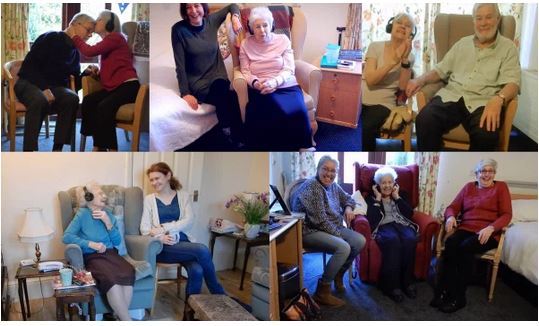 Music for my Mind has the backing of a committed and influential Board, chaired by the Founder, Professor Keith McAdam, who witnessed first-hand, the effect that music and creativity can have on well-being and quality of life in people living with HIV in a clinic in Uganda, where he was the foundation director. His background in clinical medicine and research has helped us envision a step by step process to achieve our goal, working with cross-disciplinary collaborators.
In our pilot study last year, using Spotify, and based on date of birth and music tastes in their youth, a personal playlist was created for volunteers and residents in care homes, living at different stages of the dementia spectrum. Everyone’s playlist was unique and personalised, as were their reactions and emotions. It touched not only those living with dementia, but their family and carers too.
Huguette was born and grew up in Belgium, where she listened to French and Dutch music in her teenage years. In 1973, in her 30s she met and married David, a British accountant and moved to live in England seven years later. Sadly Huguette was diagnosed with Alzheimer’s disease in 2007 aged 66. David looked after her in the family home until 2014, when it became too much for him to cope and she was moved to full time care. Now as the disease progresses she barely recognizes her visitors. She’s unable to express herself and communicate and is sometimes agitated and disruptive. Until one day she heard the sounds of ‘Ne Me Quitte Pas’ by Jacques Brel which strikingly translates to ‘Don’t Leave Me’. She responded immediately, starting to sing along and looking lovingly at her husband. The song was followed by similar pieces which again evoked an emotional reaction and recognition. She became more interactive, less agitated and her attention span increased.
We have launched a crowdfunding campaign to raise funds to help change the lives of families like David and Huguette. We will be able to commence work on pilot studies that show that music should be part of the standard of care for people living with dementia. The funds will also provide support towards securing grant funding in 2018 for conducting a large scale trial. These pilot studies will answer a series of relevant questions such as:
Is there a minimum dose of music an individual needs to improve mood?
Is there a particular time in the day when music listening has a better effect?
Does a specific type of music help in certain moods – e.g. calming music when people are agitated and anxious?
Will the same music have different effects on successive occasions?
The funds we raise will also help us work with a small, experienced team to find an efficient and automated way to build personal music playlists; develop easy-to-use systems for delivering the music to people in care homes; and establish key relationships with health organisations, care homes and technology companies that will help us move this project forward.
Our ambition is to utilise modern technology such as physiological and artificial intelligence monitors to measure emotional responses to the music and to select a favourite musical playlist. Technology developments have made these goals possible. In our pilot studies, we used a wearable monitor, which measured galvanic skin response, blood volume pulse, 3D movement and heart rate. Further research on other monitors is targeted at finding a process that can be taken to scale.
Music for my Mind is also working through leading music streaming service Spotify in compiling personalised playlists from a person’s teenage years, using the program’s recommendation service. This period represents a time where the majority of our memories is created.
We all have soundtracks to our lives, whether we recognise it or not. Everyone can help us spread the message by sharing our cause with your networks.
For full information on the Trustees and future plans you can visit our website: http://musicformymind.com/
Tagged as: DEMENTIA, MUSIC, MUSIC FOR MY MIND
Share this post: