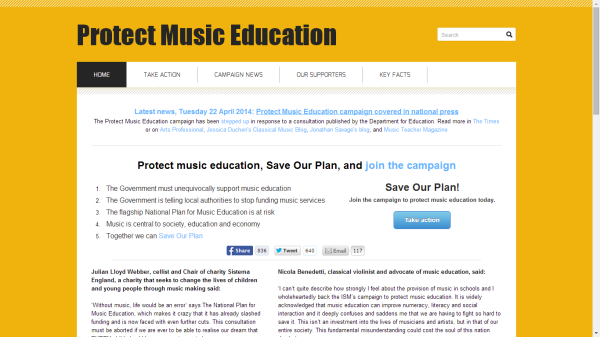 This month, we wanted to bring to your attention the Protect Music Education campaign, a drive launched in April by the Incorporated Society of Musicians (ISM) to rebuild Government support for music education.
The campaign focuses on 5 key points:
The Government must unequivocally support music education
The Government is telling local authorities to stop funding music services
Local authority funding is in addition to national funding
The flagship National Plan for Music Education is at risk
Music is central to society, education and economy
The benefits of music education, particularly amongst children who learn an instrument, have been explored widely in recent years. We have read many times in the media about the improvement in literacy and numeracy, as well as the development of skills including co-ordination, presentation and team working, which come with the study of music. Learning an instrument has been shown to have a positive impact on academic studies.
In 2013, researchers in neuroscience at the Northwestern University, Illinois, found that childhood music lessons also have long-term effects on neurological health. The study demonstrated that participants who had between four and fourteen years of musical training had faster responses to speech sounds than participants without any training, despite the fact that many of them had not played an instrument for about 40 years.
As well as being of benefit to individuals, the creative industries are worth £36.3 billion a year to the UK. The music industry is worth between £3.5 billion and £3.8 billion depending on which measure you use.
Despite this knowledge, funding cuts in music education have been a common trend for a long time. According to a BBC report from 2011, Education Secretary, Michael Gove, insisted he would ensure that all children had access to quality music education, but even with that assurance he was unable to guarantee funding beyond the end of the year.
In 2010/2011, the Government spending on music education was £127.5 million. This dropped to £111.6 million the following year.
Despite the Government’s commitment to support music education, many local authorities are being forced to cut funding, with their main budgets being slashed by at least 30%. Some councils are cutting music education budgets altogether, with the Department for Education recommending in March this year that hubs should no longer be funded by local authorities.
The recent consultation document on local education funding shows that central government expects local government to cease funding music in English schools from 2016 and there is little certainty as to the continuation of funding after the current financial year. The expectation is that music services will be funded through music education hubs and school budgets, and no longer from the Education Services Grant (ESG).
The consultation is part of a plan to make savings of up to £200 million to the ESG, stating, “Schools should take greater responsibility for their own improvement, leaving local authorities to focus on their statutory functions.” These statutory functions are broadly administrative and include planning for the education service as a whole, providing a director of Children’s Services, health and safety, pensions and other services.

This recommendation, along with cuts in funding to the Music Education Hubs, puts the National Plan for Music Education at risk.
According to a report in the May 2014 edition of Music Teacher Magazine, the Musicians’ Union are currently backing a campaign to prevent the Council in Cornwall and the Isle of Wight from cutting 92 music teaching jobs, after Councillor Steve Priest remarked on BBC South that he would be, “looking for musicians in the area to teach our children as volunteers as there are many people who can play instruments”.
On May 17th, former winner of the Young Musician of the Year, Mark Simpson, writing in the Guardian, expressed his concern that funding cuts in classical music are depriving children from low income backgrounds of the opportunity to learn an instrument.
The problem is not specific to the UK. In Ottowa, Canada, where in 2012 fewer than half of schools had even a part time music teacher, astronaut and scientist Chris Hadfield criticised cuts in music education, saying, “All these cuts are not doing our children any good, they’re not doing the development of our children any good, and I don’t think they’re doing much for Canada.” Speaking at an event promoting music education in schools which took place on May 5th, Hadfield explained, “Learning to play the guitar taught me to improvise and be creative. Music taught me to be a better astronaut.”
Protect Music Education is attracting support from musicians including violinist Nicola Benedetti and soprano, Dame Felicity Lott, journalists and organisations such as the London Symphony Orchestra and Trinity College, London. The aim of the campaign is to raise awareness of the potential threat to music in education.
MWC’s Maria Thomas says, “Many of the musicians here at the Music Workshop Company, received their early musical training through the music services. For generations, local music services run by councils have created opportunities for young people to develop their musical skills and make friendships that last for life. The Music Workshop Company fully supports the Protect Music Education campaign.”
Tagged as: MUSIC EDUCATION, THREATS TO MUSIC EDUCATION
Share this post: