Stravinsky & Diaghilev – Anniversary of a Collaboration 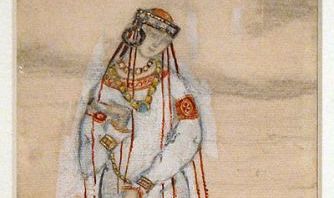 1920 was a busy year for Stravinsky and Diaghilev with the premiere of the ballet Le Chant du Roissignol on 2nd February and the premiere of Pulcinella on 15th May.
Stravinsky first worked with Diaghilev on L’Oiseau de Feu (The Firebird) in 1910.
The work is of interest both as Stravinsky’s breakthrough piece and as the beginning of one of the most well known collaborations in the ballet world.

Le Chant du Roissignol ballet premiered on 2nd February but had it’s origins in Stravinsky’s opera Le Rossignol (The Nightingale), based on the fairy tale by Hans Christian Andersen, which he began working on in 1908. In 1917, Stravinsky adapted the music into a Symphonic Poem.
The first act of the opera was written in 1908, with acts two and three written between 1913 and 1914. Stravinsky put the work on the opera on hold while he worked with Diaghilev on L’Oiseau de Feu (The Firebird), Petrushka, and The Rite of Spring. An original costume design from The Rite of Spring is pictured above.
Stravinsky’s commented on his decision to adapt the work into a Symphonic Poem:
"I reached the conclusion—very regretfully, since I was the author of many works for the theatre—that a perfect rendering can be achieved only in the concert hall, because the stage presents a combination of several elements upon which the music has often to depend, so that it cannot rely upon the exclusive consideration which it receives at a concert."
The Symphonic Poem was premiered in 1919 in Geneva and greeted with criticism due to the non-traditional use of dissonance and instruments. This may have influenced Stravinsky’s decision to adapt the piece once again, this time into a ballet for Diaghilev.
The ballet was choreographed by Léonide Massine with décor by Henri Matisse and danced by Tamara Karsavina, Lydia Sokolova and Stanislas Idzikowski. The ballet is also divided into three parts. The ballet begins with the Nightingale delighting the Emperor of China. In the second scene, the Emperor receives a mechanical nightingale which fascinates the court, leading to the Nightingale flying away. In the final scene, the Emperor becomes ill and meets Death. The Nightingale appears outside the Emperor’s window, and persuades Death to let the Emperor recover. The Nightingale leaves, returning to nature.
After the initial run in 1920, the ballet was revived in 1925 with new choreography by George Balanchine, at the time one of Diaghilev’s students. This was the beginning of another great collaboration for Stravinsky. Balanchine and Stravinsky shared a similar taste in music, art and movement and both had a passion for creation. Stravinsky commented:
"I do not see how one can be a choreographer unless, like Balanchine, one is a musician first."
Balanchine was immediately willing to take the challenge of choreographing the ballet, saying:
"I learned the music well, and so … when Diaghilev asked me to stage Stravinsky’s ballet Le Chant du Rossignol, I was able to do it quickly."

Pulcinella was based on an 18th Century play Quatre Polichinelles Semblables (“Four identical Pulcinellas”). The character of Pulcinella orginated in the 17th Century Italian commedia dell’arte.
The work was commissioned by Diaghilev who wanted a new ballet based on a piece which at the time was believed to have been composed by Pergolesi. This idea was inspired by Vincenzo Tommassini’s The Good-Humoured Ladies written in 1917, which adapted sontatas by Domenico Scarlatti. Conductor Ernest Ansermet approached Stravinsky about adapting the music, but this did not initially appeal to the composer. After Stravinsky spent time studying the scores Diaghilev had discovered in Naples and London, he changed his mind and re-wrote the music, taking themes and textures and adding modern rhythms, cadences and harmonies.
This work marked the beginning of Stravinsky’s second period as a composer, his “neo-classical” period which included works such as his octet for winds, the “Dumbarton Oaks” Concerto, the Concerto in D for string orchestra, the Symphony of Psalms, Symphony in C, and Symphony in Three Movements, the opera-oratorio Oedipus Rex and the ballets Apollo and Orpheus. Stravinsky stated that:
"Pulcinella was my discovery of the past, the epiphany through which the whole of my late work became possible. It was a backward look, of course—the first of many love affairs in that direction—but it was a look in the mirror, too."
The ballet’s creative team again featured Léonide Massine who wrote the libretto, created the choreography and danced the title role alongside Tamara Karsavina, Vera Mentchinova, Lubov Tchernicheva, Enrico Cecchetti, Stanislas Idzikowski, Sigmund Novak and Nicholas Zverev. The costumes and sets were designed by Pablo Picasso. The premiere was conducted by Ernest Ansermet. 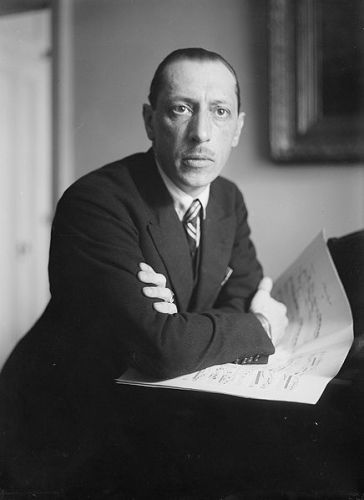 Stravinsky
The orchestration, as is often the case with Stravinsky’s work is not a standard ensemble. Pulcinella calls for Solo Soprano, Solo Tenor, Solo Bass voices, plus 2 flutes (2nd doubling piccolo), 2 oboes, 2 bassoons, 2 horns in F, 1 trumpet in C, 1 trombone plus strings which, inspired by Baroque ensembles, are grouped into Concertino – string quartet (2 violins, viola, cello) plus double bass and Ripieno of 8 violins, 4 violas, 3 celli and 3 double basses.
The ballet is in one act and features the title character of Pulcinella along with his girlfriend Pimpinella and their friends. The story starts with Florindo and Cloviello serenading Prudenza and Rosetta. The women are unimpressed and shower the suitors with water before Prudenza’s father, a doctor, chases them away.
The next section begins with Rosetta and her father. Rosetta dances for Pulcinella leading to a kiss which is interrupted by Pimpinella, Pulcinella’s girlfriend. Florindo and Cloviello arrive and being jealous of Pulcinella, beat him up. It seems that Pulcinella has been stabbed, but this is ruse to get Pimpinella to forgive him. Furbo, arrives dressed as magician and brings Pulcinella back to life. Pimpinella forgives Pulcinella, Florindo and Cloviello successfully woo Prudenza and Rosetta and the ballet ends with the marriage of the three couples.
Stravinsky’s Pulcinella’s notebook is part of the British’s Library’s collection and can be viewed at https://www.bl.uk/collection-items/stravinsky-pulcinella
Image source, Rite of Spring Costume: https://commons.wikimedia.org/wiki/File:Lélue_(Sacre_du_printemps,ballets_russes)(4557057918).jpg
Tagged as: BALLET, CLASSICAL DANCE, CLASSICAL MUSIC, CLASSICAL MUSIC DIAGHILEV, COMPOSERS, COMPOSING, COMPOSITION, CREATIVE PARTNERSHIP, CREATIVITY, DIAGHILEV, GREAT COMPOSERS, IMPORTANT ANNIVERSARIES, MUSIC HISTORY, OPERA, PETRUSHKA, PULCHINELLA, STRAVINSKY, SYMPHONIC POEM, THE 1920S, THE RITE OF SPRING
Share this post: