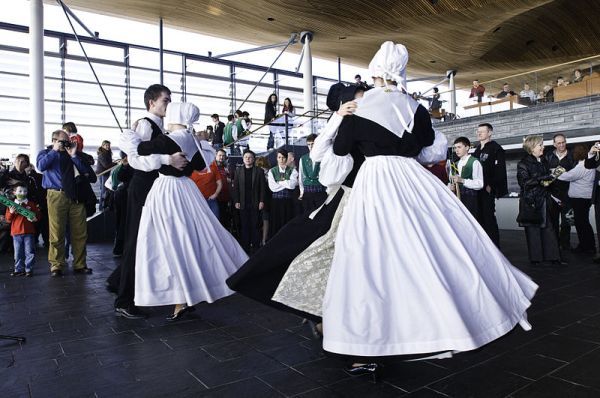 Music holds an important place in Welsh national identity – so much so that Wales is traditionally referred to as the ‘Land of Song’. However, despite the positive implications this moniker has in terms of the Welsh affinity with music, this is actually a modern stereotype based on the importance of 19th century choral music and 20th century male voice choirs, and in some ways it clouds a long and unique musical and social history.
[Image: National Assembly for Wales]
Like Ireland and Scotland, Wales has its own history of folk music, its own cultures and its own dances. The music has distinctive instrumentation and song types. It can traditionally be heard at a twmpath (folk dance session), gŵyl werin (folk festival) or noon lawen (traditional party similar to the Gaelic ceilidh). The fact that Welsh music is less familiar than that of England, Scotland and Ireland is simply due to many years of suppression.
The main reasons for this effectual annihilation of Welsh history were politics and religion. Various Acts of Union, and in particular the 1707 Act that formed the Kingdom of Great Britain, promoted the English language and the eradication of Welsh culture, and the rise of the Methodist Church in the 18th and 19th century further silenced Welsh voices.
"The fervent zeal of the religious revival of the latter part of the last century and the early years of the present century, persecuted and exiled old traditionally Welsh dances." A Welsh Folk Dancing Handbook by A E Williams

Wales is a small country. It stretches only 130 miles from north to south with a population of around 3 million. Its initial loss of independence came with the fall of Llywelyn ap Gruffudd during the 13th century. In 1536 Wales was brought under the laws and customs of the English crown and the Welsh language was outlawed. The nationalism prevalent during the 18th century went some way to encourage Welsh patriotism, which slowly grew throughout the 19th and 20th centuries. St David’s Day celebrations became common, the red dragon (the royal badge of Wales since 1807) and an unofficial national anthem (Hen Wlad fy nhadau or Land of My Fathers has been used since around 1905) returned a sense of national identity and pride. But much of what could be interpreted as Welsh patriotism was a tourist-orientated and romanticised ‘Victorian’ version of the country’s genuine culture.
In recent decades much work has been done to advance the Welsh language and the customs of Wales. Radio and television channels transmit in Welsh, the country has an increasing presence in parliament from members of Plaid Cymru, and in September 1997 a national referendum furnished Wales with its own elected assembly. Thanks to the work of individuals and societies like the Welsh Folk Dance Society (formed in 1949) there is an abundance of Welsh folk dancing today.
About the dances
Welsh folk dancing encompasses several forms of dance – set dance (couple dancing), Morris dance and clog (or step) dance.
Clog dancers create rhythmic sounds by the placing and timing of their steps, manipulated with foot, ankle and shoe, a wooden-soled clog. Clog dancing differs from tap dancing in that it relies on the use of the whole foot rather than the ball of the foot, but like other forms of dance it includes the use of improvisation. Male dancers would often perform solo step dances in the local village pubs, competitive displays of virility, strength and agility. Women’s solo step dances were generally more controlled and portray aspects of folklore such as the ‘Mother of Wales’ and local customs such as courting rituals.
Set dancing is a kind of dance where everyone can join in and the dance can often be learned quickly. If you have ever learned a ceilidh dance at a wedding or party this will be a familiar concept. Folk dances are social by nature. This can be seen in the Children Festival, Gwyl y Plant, where children from all over Wales come together to dance the simple twmpath dances.
Some dances, including court dances, are much better suited for display and are most often seen at Eisteddfods where the dance itself and the skill of the dancers is important. In fact, these competitions have helped to raise the standard of dancing. Dance performances must be based on traditional patterns and steps, though it is argued by some participants that this hinders the natural development of a living tradition.
Morris dancing also exists in Wales. Dances are associated with important festivals and days including Christmas and the New Year.
Welsh folk dancing only saw a revival in the early 20thcentury, making it a relatively young tradition. Its survival and progression relies on its popularity with younger generations. The tradition was suppressed for over a century, and there is no way of fully knowing what a folk dance looked like. The music and dance styles from other countries and regions within the British Isles will have influenced Welsh dance in the meantime, and these influences are as integral to the tradition as they have been to the history that built it. Old manuscripts, notations and visual recollections provide clues but no absolute points of reference that a dance was ‘exactly’ one way or another. In some ways this gives the opportunity to look at where Welsh dance fits in Wales today, rather than holding onto an authentic version of its steps, styles and meaning, opening the way for the true continuation of a living tradition.
Tagged as: DANCE, FOLK DANCE, WALES, WELSH DANCE
Share this post: