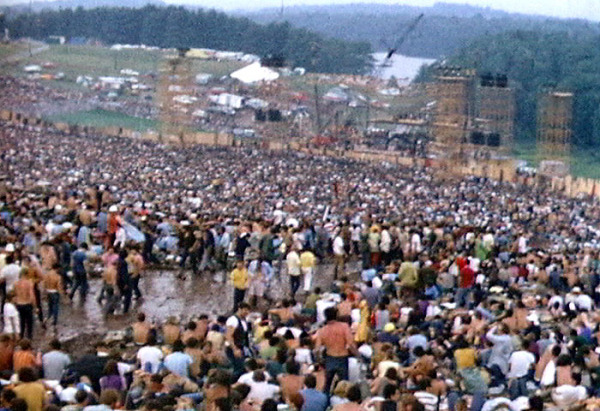 August 2019 marks 50 years since Woodstock ’69, the ‘most popular event in music history.’
Held between August 15 and 19 1969, Woodstock took place at Max Yasgur’s 600-acre dairy farm in Bethel, New York. The festival, which was billed as ‘An Aquarian Exposition: 3 Days of Peace & Music’ drew crowds of more than 400,000 people who heard 32 acts performing open-air gigs, sometimes playing through the rain.
Described by singer songwriter, Joni Mitchell as, “A spark of beauty” where half-a-million kids “saw that they were part of a greater organism”, Woodstock has long been regarded as a pivotal movement in both popular music history and within the larger counterculture generation. Rolling Stone listed the festival as number 19 of ‘50 Moments That Changed the History of Rock and Roll,’ and in 2017, the festival site was listed on the National Register of Historic Places. While it wasn’t the first music festival, it was certainly the biggest of its time, and quickly assumed almost mythological status.
The event was recorded via the 1970 Academy Award-winning documentary film Woodstock (and its accompanying soundtrack album), and encapsulated in Joni Mitchell’s song of the same name which became a major hit for both Crosby, Stills, Nash & Young and Matthews Southern Comfort.
Performers included Richie Havens, Ravi Shankar, Joe Cocker, Joan Baez, Santana, Grateful Dead, Janis Joplin, Sly & the Family Stone, The Who, Jefferson Airplane and Jimi Hendrix.

The Effect on Music and Musicians

Woodstock had a powerful impact on rock musicians, folk musicians and those invested in counterculture. This was a transformative time in music. The Beatles broke up in September 1969, though John Lennon’s departure from the group wasn’t announced until April 1970. Janis Joplin died in October 1970 of a heroin overdose, Hendrix in September of the same year of a barbiturate overdose – two of the most influential counterculture musicians gone shortly after the festival where perhaps their fame had peaked.
The festival advanced the popularity of many budding musicians too, and helped solidify lasting careers. Carlos Santana, now considered to be one of the greatest guitar players alive, has released 25 studio albums since appearing at Woodstock.
The former promoter of Humphreys Concerts by the Bay, Kenny Weissberg, reflects in his 2013 memoir, Off My Rocker:
"The music, the sharing, and the collective zeitgeist were all life-changing…Even though I was only 21, I came away from that weekend profoundly aware that anything was possible. From Woodstock on, I embraced the idea of taking chances and following all of my musical dreams. Three days at Woodstock crystallized my life’s path."
However, Pete Townshend of The Who presented an alternate opinion. Despite the fact his band played a career-changing performance at Woodstock, Townshend’s assessment was:
"The dream and ideology of rock ’n’ roll was rooted in the idea that this generation, the ‘Woodstock generation,’ were super-luminaries, but I’ve never agreed with that. I always thought that was the biggest crock of s— America has ever come up with."
The Who’s set at Woodstock was interrupted by an anti-war activist, Abbie Hoffman, who grabbed a microphone and launched, mid-song, into a political rant. Townshend hit Hoffman with his electric guitar, pushing him off stage and dispelling any idea of ‘peace and love.’
While the spirit of the festival was very much anti-materialism, and due to ineptitude it took the promoters nearly a decade to recoup their losses, Woodstock was essentially created to make money for its promoters. In the aftermath, the success of Woodstock became a capitalist goldmine. It was immediately apparent to corporate America that this young audience represented a huge untapped market.
The music may have been seminal, and the event undoubtedly changed the way live music developed as an industry, but the overriding nostalgic image of peace, love and freely available drugs certainly wasn’t for everyone. Commenting on a 45thAnniversary feature in the San Diego Union Tribune, singer Billy Joel said:
"I went to Woodstock and I hated it. I think a lot of that `community spirit’ was based on the fact that everybody was so wasted. Because everybody was stoned — everybody was passing around pot and acid — and I wasn’t into it… I was there for a night and a day, and then I left just before The Who went on. I really wanted to see them, but it was very hard to because everybody was hopping up and down and banging into you. So I walked out and hitched a ride home."

This was also a transformative time culturally. Barely four months after Woodstock, the utopian bubble burst at the Altamont free music festival near San Francisco. Fans arrived in their hundreds of thousands to hear the Rolling Stones and Woodstock veterans including Jefferson Airplane, Santana and Crosby, Stills, Nash & Young. Things took a turn for the worse – the Stones had arranged security for themselves, provided by members of the Hells Angels, leading to some festival goers being beaten, and a young African-American man, Meredith Hunter, who waved a gun, was stabbed and beaten to death. While Woodstock attracted a peaceful, multiracial audience, Hunter’s death stood in stark contrast.
Woodstock presented a place for people who embraced hippie culture to find a sense of deeper community – in that sense the festival became a flagship for counterculture ideals such as equality of race and sex. It was also a place where LSD use peaked – drug taking was seen as a way to protest, to make a political and cultural statement against society, and to have fun whilst doing so.
Issues surrounding Vietnam were very present at the time, and Woodstock was followed in October 1969 by Moratorium to End the War in Vietnam – a massive demonstration and teach-in across the United States against the United States involvement in the Vietnam War. 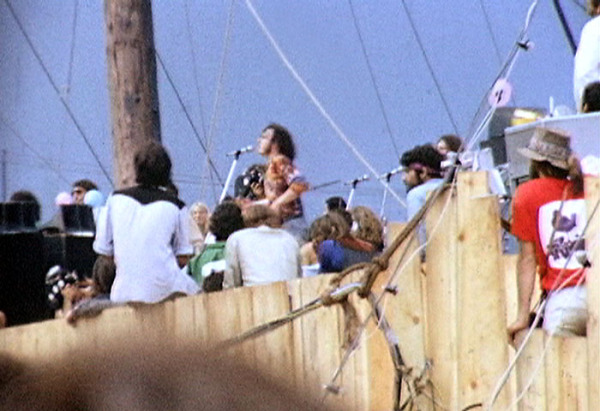 Fifty years have passed since Woodstock, and society is still struggling with issues of equality, war and community. Under the banner of the utopian nostalgia around the festival, promoters were planning a huge Woodstock 50 event to commemorate.
One of the main investors was Japanese international advertising and public relations joint stock company Dentsu, the fifth largest advertising agency in the world in terms of worldwide revenues (932,680 yen in 2018).
Dentsu explained its involvement, underlining how commercial the music industry has become:
"It’s a dream for agencies to work with iconic brands and to be associated with meaningful movements. We have a strong history of producing experiences that bring people together around common interests and causes which is why we chose to be a part of the Woodstock 50th Anniversary Festival."
However, Woodstock 50 has been cancelled because investors “don’t believe the production of the festival can be executed as an event worthy of the Woodstock Brand”.
50 years on, what has been called a “spark of beauty” and remembered an iconic event that centred on community, social justice and love of music has been relegated to the status of ‘brand’.
Woodstock’s impact on live music has been phenomenal – in terms of musical influence and maybe even more so in terms of the money that non-musicians can now draw from the industry. But the music and political hope that this gathering promised live on.
As, perhaps, does the ideal described by Kenny Weissberg: That anything is possible when enough people believe.
Tagged as: COUNTERCULTURE, INFLUENTIAL MUSICIANS, JANIS JOPLIN, JIMI HENDRIX, LIVE MUSIC, MUSIC, MUSIC AND POLITICS, MUSIC AND PROTEST, MUSIC FESTIVALS, MUSIC HISTORY, MUSIC INDUSTRY, ROCK MUSIC, SUMMER MUSIC, THE BEATLES, WOODSTOCK
Share this post: