Music in Shakespeare’s Plays: A Window on Society 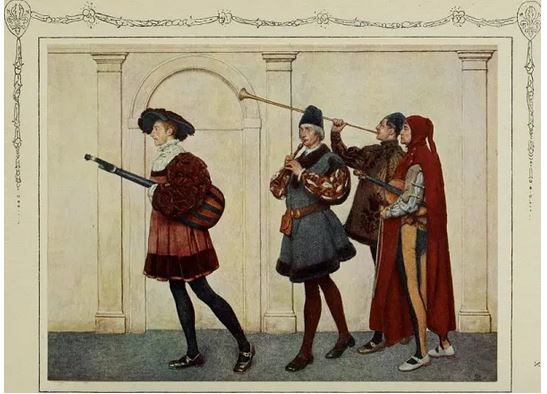 The end of April 2016 marked the 400th anniversary of the death of William Shakespeare. To commemorate, MWC talks to historic music specialist Emily Baines about the role and relevance of music in Shakespeare’s works.
“Music plays a hugely important role in Shakespeare’s plays, but you would be hard pressed to find a performance claiming to use music exactly as Shakespeare did. Remarkably little is known about the music he used in performances. This is most likely because this aspect of the performance would have been kept rather fluid, changing from revival to revival to keep up with the times, unlike the texts (except perhaps for prologues and epilogues which could have been altered to keep them topical and current).
Music was used in a way that scenery and even lighting effects are often used in modern theatres. There are some clear musical indications in both text and stage directions – trumpets and drums, alarums, ‘solemn’ or ‘still’ music to accompany pageants and of course songs. Music, and sound effects can transport the audience into a battlefield (trumpet calls are a language in themselves), towards an execution, through a storm, to a party or make the characters fall in love. It can indicate the supernatural (one of its most common usages in early modern theatre) and inform us of the point when we can ‘un-suspend’ our disbelief (the jig at the end of the play would feature music, dancing and even short slapstick skits or satirical plays in a “Have I Got News for You” vein). It can focus in, creating a spotlight effect and move the audience’s attention to the wider surroundings. 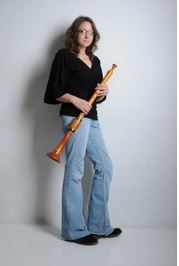 The direction from Anthony and Cleopatra, “Music of the hoboy is under the stage,” is a famous example, indicating something otherworldly taking place. The hoboy is an early form of our word oboe and in this case it indicates shawms, the forerunner to the modern oboe. Its position is telling, as firstly we can see that music was not necessarily played from a fixed point but from many areas of the performance space. It would most frequently be heard from the stage and the musicians’ gallery, but it would also often have been played from inside the backstage area, often known as the ‘tiring house’. Music from under the stage would have been unexpected, in this period listeners would hear music frequently but would also be able to see or locate its source.
The notion of hidden music whose source cannot be identified is a frequent indication of the supernatural in the plays of Shakespeare and its low down location would have been both disorientating and darkly portentous. The shawm sound could provide the necessary menace for the moment when Antony’s fate is sealed. It has also been suggested that its timbre would have been one of the few instruments penetrating enough to be heard clearly when shut away under the stage. 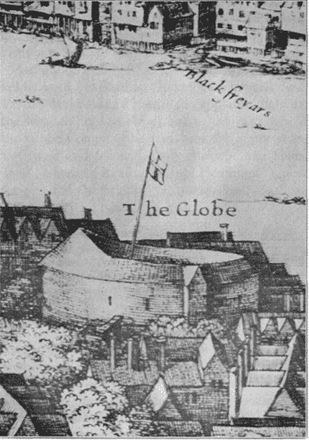 Performances using period instrument specialists in replica early modern theatres, such as the Globe and its indoor theatre, the Sam Wanamaker Playhouse may disprove this however. The buildings have very delicately balanced acoustics so that many quieter instruments can be played in many offstage positions and heard almost as ‘surround sound’ whilst still enabling speech to be heard on top. The instruments and the buildings complement each other perfectly enabling many old preconceptions about Shakespeare’s musical possibilities to be challenged and providing a unique insight into a beautifully balanced acoustical sound-world.
Indeed they were so perfect that the indoor theatres sometimes featured up to an hour of instrumental music before the main performance began, and also between acts. You could really get your money’s worth in the 16th/17th century theatre.
Research into these buildings and their unique acoustics changes our ideas of how music and text could interact historically, feeding us with new ideas and refreshing modern outlooks and preconceptions about how we stage these works.
Similarly, research into the many songs Shakespeare refers to in his plays gives us a deeper insight into the world the Bard inhabited and his place within it. This also feeds into how we stage plays and our attitude to the text.
There are hundreds of songs referenced in Shakespeare’s plays, most of which would have been instantly recognisable and which would have provided a whole extra level to the Elizabethan/Jacobean audience. These songs would have been songs so deeply embedded in the cultural consciousness that virtually all strata of society would have understood the subtext they provided potentially changing the whole meaning of a line or even scene.
The Broadside Ballads, song texts sold for a penny on single sheets, were a means of entertainment, often telling stories, whether classical or (quite explicitly) bawdy but also acting as early forerunners to newspapers or satirising well known figures.
The stories such as that of Dido and her lover Aeneas or the news of a shipwreck off the coast off Bermuda could all primarily have been known through their ballad re-tellings. The songs were not printed with any musical notation, but only indications, “To be sung to the tune of…..”, meaning that they were to be sung to pre-existing popular tunes.
It is hard for us to imagine how well known these tunes were. It was not a matter of taste or background, these were universally familiar within the timeframe and locality in which Shakespeare was writing.
It is telling that Shakespeare does not generally refer to highbrow compositions but to the kind of pervasive music heard throughout the streets, taverns, and court. Shakespeare’s song lyrics too would have been set to pre-existing melodies: although some composers may have set them we have no evidence to definitively place these compositions in the first performances. This would also have lent the songs he wrote another level since the implications of previous lyrics set to the same tune would have been carried forward. A tune which had previously been used for a particularly explicit bawdy lyric would surely have brought this association forward, lending a highly suggestive edge to an otherwise innocent love song. The tunes would also have changed as plays were revived, as would any incidental music and indeed the references in some of the text, reflecting changing fashions and political backdrops. We get an impression here of a man not highbrow or pioneering in his attitude to music, but one who perfectly understood its universal communicative power and used this as a code through which to add level upon level of subtext, whether political, emotional or highly immoral (commonly the latter). 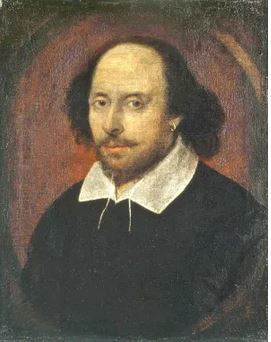 The type of ongoing historical research which has led to this understanding of Shakespeare as a pragmatic popular entertainer as well as a genius poet should feed our imagination with inspiration. Future research may, indeed should, find ways to challenge these, leading to new and different ideas.
This dialogue between research and practice should be ongoing and each should fuel the other to prevent stagnation. The function of historical research is not merely to create museum pieces that can seem didactic and dry. It is fascinating to have plays performed with their original pronunciation, with ‘original’ music, and in period costume, and long may this continue, but we must not forget to research the spirit in which they were performed, the society which prompted their creation, and the attitudes of creators towards the artworks we study; the ‘why’ as well as the ‘how’ things were done.
We have a tendency to judge our subjects for historical study, whether musical, theatrical or literary by the standards of our own times. We can perceive them as revered absolutes, perfect examples of genius or as art for art’s sake, but a deeper look at the society from which they arose, which is so alien as to be virtually unrecognisable by our current standards, may lead us down many more exciting different new paths.” 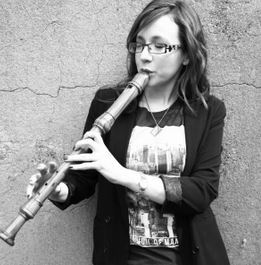 Emily Baines is a freelance recorder player, singer, teacher/lecturer and musical director working throughout Europe, also specialising in a wide variety of historical/folk woodwinds. She trained in recorder and voice at; the University of Hull, the Koninklijk Conservatorium (The Hague) and the Guildhall School of Music and Drama where she is now a researcher on the school’s Doctoral Programme. In addition to research Emily performs regularly for many period instrument ensembles, contemporary groups, music festivals and theatres across Europe. Her theatre work has included musician and musical director roles for Jericho House and Just Enough Theatre Companies and Shakespeare’s Globe Theatre. She also lectures on music and Shakespeare’s theatre for the Globe’s education department.
www.emilybaines.co.uk
www.renaissance-winds.com
Tagged as: HISTORIC MUSIC, MUSIC FOR THEATRE, PERIOD MUSIC, SHAKESPEARE
Share this post: