On 20th November, UK Music, the campaigning and lobbying group, which represents every part of the UK Recorded and Live Music Industry, launched it’s Music by Num8ers 2019 report.
Each year, the UK Music report shines a light on the value and contributions made by the music industry.
This year the report highlights the £5.2 billion contribution to the UK Economy that the music industry makes, with 190,935 full time jobs being sustained by the industry, up from 145,815 the previous year.
The music industry covers various sectors, including music creation, the live sector and the recorded sector (see table for breakdown). The Music Creators sector generates £2.5 billion in Gross Value Added (GVA) which is almost half the total industry GVA. The Live sector made a GVA contribution of £1.1 billion in 2018, up from £990m the previous year. In terms of export, the Recorded sector contributed £478 million and Publishing £618 million to the total export revenue of £2.7 billion. 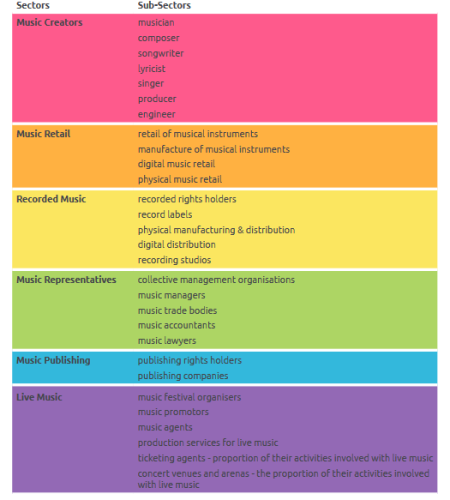 The report uses the terms Sectors (or thematic groups as shown above) and Sub-Sectors (or elements of the core) to define the various parts of the music industry. The sub-sectors all contribute to the commercial assets of the UK Music Industry:

UK Music highlight the two relationships to the commercial assets – “economic activities that create these commercial assets. (An example is the creative process of composing, performing or recording music.)….[and] economic activities whose primary focus is upon the steps necessary to bring these assets to a position where they are able to be distributed and transacted with consumers and businesses in one way or another.”
The report stresses that the inter-dependency between the sectors is “what gives the UK music industry its diversity and economic success, fostering a unique eco-system.”

Alongside celebrating the successes of the industry, the report also puts a spotlight on some of the challenges. For example, the high GVA for Music Creators, does not adequately show the financial struggles of many music creators. Although those at the highest levels, do earn high income from their work, the Office for National Statistics (ONS) show that musicians earned an average income of £23,059 in 2018 – well below the national average of £29,832.
In 2018, a total of 139,352 people were employed in the Music Creators sector, and employment growth continues to be robust as more creators move from part-time to full-time work. Research by the DCMS, shows that 72% of those working in music, performing and visual arts are self-employed compared to just 15% of the UK working population as a whole (ONS). The Music Producers Guild found that 94% of its membership is self-employed, according to their 2019 survey.
Freelance work can be challenging and many music creators find it hard to maintain a full-time career. This has led to a workforce where many people balance multiple roles within the industry. A shift in the industry in recent years, which is highlighted in this research. is the move to more artists self-releasing, self-managing and self-publishing. Although there can be benefits to this way of working, it can also put pressure on these individuals and leave them at risk when developing their careers.

Music Retail covers retail and manufacture of musical instruments, plus digital and physical retail. The report highlights that although music instrument sales are an area that is often overlooked, it contributes £402m total GVA.
In terms of “physical music”, vinyl continues it’s growth up 1.5% on the previous year. Initiatives such as Record Store Day and National Album Day have helped this growth, particularly for small independent shops.
Streaming continues to grow, the BPI report that there was a growth of 33% from the previous year – a total of over 90 billion streams in 2018. One challenge for the sector is to ensure that music creators are fairly financially compensated for their work.

This sector includes a wide range of areas including record labels, music distributors, recorded rights holders, physical manufacturers and for the first-time in UK Music’s research, recording studios. The sector had a 5% rise of GVA, contributing £568 million in GVA to the UK economy, and a rise of 8% in exports -£478 million. The BPI reports that Label revenues alone, increased by 3% – a third consecutive growth in label revenues.
The report highlights the significant investment and risk undertaken by the record labels which helps contribute to the value created by the sector as a whole. While the inclusion of studios in the data for the first time has helped raised the GVA, the research demonstrated that many studios are facing pressures from increasing rent and business rates leading to businesses having to diversify by renting office space, promoting events and moving into educational activities.

The Music Representatives’ sector includes a wide range of personnel and skills including music managers, music trade bodies, collective management organisations (CMOs) and for the first time in UK Music’s research, lawyers and accountants who represent music organisations or music creators are also included.
This sector added £148 million to the music industry’s GVA in 2018, while exports remained strong at £387 million. In terms of export revenue, contributions from collective management organisations (CMOs), such as PRS For Music and PPL, were a large part of the total export revenue. CMOs deal with the management of copyright and the collection of revenue for their members who include musicians and performers.
The report highlights the changing role of music managers who are working with Artists earlier in their careers and investing their own money in Artists development: 74% of managers surveyed by the Music Managers Forum have invested their own money to support the careers of their current clients, while 40% have received no outside investment for their artist.

Music publishers and publishing rights holders work on behalf of songwriters and composers, to collect revenue when their work is used commercially, securing commissions and sync deals: when work is licensed for use in film, advertising and games. The sector contributed £459 million in GVA to the UK economy and £618 million in exports .The Music Publishing sector currently maintains around 1,363 jobs. Over the past five years, there have been large changes to the sector with several consolidations within the publishing world and many businesses have merged to form larger organisations, however the number of employees have continued to increase reflecting the industry’s expansion.

As highlighted, the live sector is particularly vibrant, it covers festival organisers, promoters and agents, production services, and ticketing agents, grassroots music venues, concert venues and arenas (the proportion of their activities which involve live music.) As a key player in the industry, Glastonbury has a large impact on the live sector, however even though 2018 was a fallow year for Festival, there was a surge in festival ticket sales across the country leading to a record high of £1.1 billion GVA, which is a 10% overall rise on 2017. UK Music’s research shows a total of 4.9 million people attended festivals in 2018 compared to 2.7 million in 2012.
In terms of venues, three of the top 13 arenas in the world – The SSE Hydro in Glasgow, the Manchester Arena and the 02 Arena – are in the UK, according to Pollstar. It is important to remember that grassroots plays a vital part in the industry’s eco-system, acting as an incubator for emerging talent, an area that is facing challenges. A total of 30,529 people were employed in the live music sector in 2018, a rise of 7% on 2017.
Music Tourism is a key part of the Live Sector this includes those travelling from overseas, as well as domestic tourists, who live in the UK but are not local to the events they are attending. 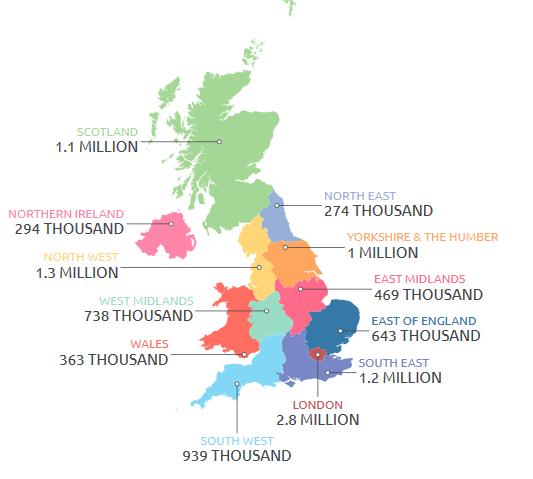 The report has highlighted several challenges facing the music industry such as the impact of business rates on grassroots development, copyright protection, shared parental leave for the self-employed, international trade support, talent pipeline including students taking GCSE and A level music, touring post-Brexit and fiscal incentives. UK Music continue to support the music industry and make the case for further government support.
All images in this blog are from the original report, the full version of which can be found here.
Tagged as: LIVE MUSIC, MUSIC, MUSIC AND BREXIT, MUSIC AND THE ECONOMY, MUSIC FUNDING, MUSIC INDUSTRY, MUSIC INDUSTRY REPORT, MUSIC JOBS, RECORDED MUSIC, UK MUSIC, UK MUSIC INDUSTRY
Share this post: