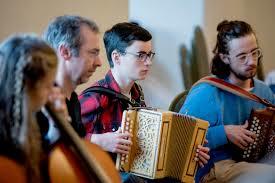 How the National Youth Folk Ensemble offers opportunities for young musicians.
The National Youth Folk Ensemble was set up in 2016 by the English Folk Dance & Song Society to provide a progression route for talented young folk musicians. Ensemble members experience intensive residential courses where they create new arrangements of folk tunes, guided by inaugural Artistic Director Sam Sweeney and a team of leading folk artists.
Watch this film to find out more:
During the courses, which are funded by Arts Council England, the tutors support the young musicians to develop their individual musicianship and ensemble skills in an environment of creativity and collaboration.
Elye Cuthbertson, aged 14, melodeon:
"I discovered folk music for the first time when I attended a course at Cecil Sharp House when I was 9 years-old, and I loved it! So I kept going, and later joined the London Youth Folk Ensemble. When I first watched the National Youth Folk Ensemble perform, they blew me away and inspired me to try to take my folk music to the next level. Since then, the Ensemble has taught me a lot about my own solo playing and playing in a group. The tutors are great at challenging us beyond what we thought we could do and they guide us really well, while letting us contribute our ideas and make the decisions. On the last residential course, they helped prepare us for our gig, but they emphasised the point that it was our gig, not theirs! We were also encouraged to think about how we play music: that it’s the small, subtle ‘nuances’ that really give a tune its life. I’ve also learned a lot just from playing with the other young people. It’s not often you get about 20 talented folk musicians under the age of 20 (or even 60!) all playing together! But when it happens, I think it’s pretty magical."

One important aim of the Ensemble programme is to raise the profile of folk music by taking it to new audiences. During our most recent residency, in Giggleswick, North Yorkshire, the Ensemble performed for local school children and we collaborated with youth music charity NYMAZ to film the concert for an online audience.
Visit www.connectresound.live/watch to view the film and download the teachers’ resource pack.
Sean Spicer, aged 16, harmonica:
"The Giggleswick concert was terrific. We played five numbers that we had arranged together, from Winders Hornpipe to the experimental Apple Processional written by fiddle tutor Emma Reid, which had an eerie improvised introduction. Even though this was my first public performance with the Ensemble and I was slightly nervous as we went on stage, my butterflies were soon replaced by exhilaration. It was very special to play collaboratively in a unit, and having such a supportive and enthusiastic audience of school students brought the performance to life. It is rare in a folk audience to see so many young faces. With the live stream also going out across the country, it really felt as if we were making a connection and spreading the message."
Another aim is to improve practice in folk music education, and we are encouraging the Ensemble members to develop skills as educators and leaders.
Rowan Collinson, aged 17, 5-string fiddle
"For me, performing with the National Youth Folk Ensemble is one of the best feelings in the world and this gig was particularly special. Working with NYMAZ, we had a brilliant opportunity to showcase folk music to children and young people in the theatre and online. This made it a very different experience to a normal gig and it was great to be able to include interactive workshop sections to really engage with our audience. Actively demonstrating how we took a tune from an old manuscript and created an arrangement really involved the audience, and they all seemed to enjoy clapping and stamping the different rhythms of 3/2 hornpipes and jigs!
Of course, interacting with an audience is quite a challenge – there are no second chances! The tutors helped us prepare, working not just on the music but also on our stage presence and confidence to communicate with the audience. We had an amazing session with musician and theatre practitioner Tim Dalling who helped us to really be ourselves on stage.
It was amazing experience to share something that means so much to us with a new young audience in such a dynamic and innovative way. I really hope this concert has inspired children across the country to get into folk music!"
If you are interested in learning more about folk music, or are inspired to apply for the National Youth Folk Ensemble, come along to a free Youth Folk Sampler Day! These are creative workshop days for 14-18 year olds, with optional auditions, taking place across England in May half-term.
Visit www.efdss.org/youthfolk to book your free place.
All images by Camilla Greenwell courtesy of the National Youth Folk Ensemble.
Tagged as: FOLK MUSIC, MUSIC AND YOUNG PEOPLE
Share this post: